COVID-19: How to Protect Yourself
Important Information about COVID-19 and People with Chronic Kidney Disease

Loss of appetite is a common problem when the kidneys fail to clean waste out of the blood. Getting enough protein and calories is important for staying healthy and preventing muscle loss.

If your appetite is poor:

The recipes are recommended for all stages of kidney disease and are low in sodium, potassium, and phosphorus.

Vitamins are compounds found in the foods we eat and have many purposes in the human body. Eating a variety of foods is the best way to get all of your vitamins. People with chronic kidney disease (CKD) may not get enough of some vitamins because of diet restrictions, poor appetite or vitamin losses during dialysis treatments. In general CKD patients, especially those on dialysis, may need extra water-soluble vitamins like the B vitamins. Some vitamins and minerals must be limited or avoided because levels can build up in the body as the kidneys stop working. In general these are the fat-soluble vitamins like A, E and K and minerals such as potassium and phosphorus. These shouldn’t be supplemented unless ordered by your doctor. A daily vitamin supplement specifically designed for kidney patients is often recommended. If your doctor has not prescribed a vitamin supplement, ask if you would benefit from one. Only use the vitamin supplement approved by your health care team.

Being physically active does not increase your protein needs unless intense training for several hours a day is part of your routine. Additional protein requirements are recommended for pregnant and lactating women.

Moderate alcohol use may be okay, but it’s best to check with your doctor to find out if it’s safe for you. Drinking too much alcohol can contribute to high blood pressure, high blood triglyceride levels, blood thinning, pancreas and/or liver damage, and it may interact with your medications. In addition, alcohol may make blood pressure or blood sugar more difficult to control, and can lead to weight gain.

If you are drinking alcohol, drink no more than 1-2 standard drinks a day and no more than 14 drinks per week for men and 10 for women.

Similar to certain vitamins, some herbal supplements can be harmful to people with kidney disease. Speak with your doctor, dietitian or renal pharmacist if you are taking any herbal preparations as they can guide you on which ones may be of concern.

There are many ways to help delay the progression of kidney disease, especially if you are diagnosed in the early stages. Here are some tips that can help you protect your kidneys:

Remember it is never too late to make positive changes to your lifestyle. Eating well and keeping active can improve long term health and help you maintain good kidney function.

Animal protein foods such as beef, lamb, pork, poultry and fish are very rich in protein.  Eating these protein-rich foods make it easier to meet your dietary protein needs.

For those who eat meat but can only tolerate small amounts, eat small quantities of protein more often and incorporate meats into mixed ingredients dishes such as in soups, salads, pastas, sandwiches, etc.  People who dislike red meat and/or poultry may enjoy fish.  Fish is an excellent source of protein.  The consumption of egg and low phosphorus cheese (e.g. softer cheeses such as brie, camembert, goat, cottage cheese) can also help meet protein needs.  It is important to speak to your dietitian to know how much meat, egg and cheese is appropriate for you.

Some people may choose to NOT eat meat for various reasons (e.g. religious reasons, preferences, taste aversions). For those who avoid all meats, you may be able to consume additional milk products, tofu, or legumes to meet your protein needs. Often, however, additional milk products and legumes cause an undesirable rise in blood phosphorus levels.  Speak to your dietitian about your blood levels and food intake.

A fluid restriction is a recommendation that comes from your doctor or heath care team. Restricting fluid unnecessarily may cause problems so be sure to ask your doctor.

Yes, artificial sweeteners approved for use in Canada are safe to use by chronic kidney disease patients.

Health Canada regulates all sweeteners that are used and sold in Canada. Sweeteners are only approved when scientific evidence confirms that they are safe.

The following shows the different types of sweeteners that have been approved for use in Canada:

Aspartame is marketed under the brand names of Equal™ and Nutrasweet™. It’s used in soft drinks, yogurt, candy and as a table-top sweetener. It contains phenylalanine, so people with phenylketonuria (PKU) must avoid aspartame.

Sucralose is marketed under the brand name Splenda™. It is widely used in soft drinks, candy, baked goods and frozen desserts and ice cream products. It is also used for home cooking and baking.

Acesulfame potassium is not used as a table top sweetener. It’s used only by food manufacturers as an ingredient for sweetening soft drinks and candy.

Sugar alcohols (sorbitol, mannitol, maltitol, xylitol) can’t be bought as table sweeteners but are used by food manufacturers in foods and beverages such as candy, frozen desserts and ice cream products. Sugar alcohols are not “true” artificial sweeteners – they do provide small amounts of calories which may affect blood glucose (sugar) levels. Large amounts (more than 10 grams/day) can cause diarrhea, cramps, gas and bloating.

Saccharin is marketed as the table top sweetener Hermesetas®. It can only be bought at pharmacies in Canada. If you are pregnant, check with your doctor before using saccharin.

Stevia leaf and extract of stevia leaves are approved for use as ingredients in certain natural health products. Purified stevia extract, also known as “steviol glycoside” is approved as a table top sweetener and food additive in some foods such as candy, gum, baking mixes and snacks.

Cyclamate is marketed as the table top sweeteners Sucaryl®, Sugar Twin® and Sweet ‘N Low®. It is not permitted as a food additive in Canada.

For pregnant and breastfeeding women
If you are pregnant or breastfeeding approved sweeteners, including aspartame, acesulfame potassium, sucralose and sugar alcohols are considered safe. However, make sure artificially-sweetened foods are not replacing nutrient-rich foods you need for a healthy pregnancy.

Congratulations on your transplant! Each transplant is different and as you progress, your blood work will greatly assist your doctor and renal dietitian to guide you on what foods to include in your diet. Your protein requirements are usually higher after a transplant in order to promote wound healing and also because of higher doses of steroid medications used to suppress your immune system. Your blood sugars may also be higher because of the steroid medications, especially if you have diabetes. Your doctor or a diabetes educator can help you manage your blood sugars. The higher dose of steroid medications will also increase your calcium requirements so you should focus on including calcium rich foods to keep your bones strong. In general, you should continue to follow a low sodium diet unless otherwise directed by your health care team.

Quite often, a higher intake of whole grains, bran, nuts & seeds, beans and lentils are recommended to ensure you are getting adequate minerals like phosphorous and magnesium. Lastly, preventing unwanted weight gain post-transplant as a result of increased appetite, increased palatability of food and less dietary restrictions is important. Ask your doctor for a referral to a renal dietitian if you would like advice on what foods to include in your diet for optimal health.

If a Nutrition Facts table provides potassium content, what do the numbers mean?  The following guidelines may be useful when deciding if a food has a lot or a little potassium:  (always check with your renal dietitian for individual guidelines)

For a list of high potassium foods, please refer to our Fact Sheet on Potassium and CKD. Were your questions answered? If not, please feel free to ask us and we’ll respond as soon as possible.

Connect with the Community 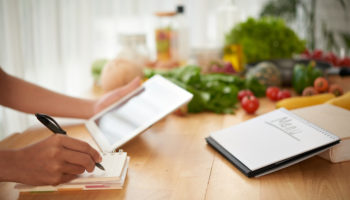 The Menu Planner allows users to create daily and weekly plans. While you don’t need an account to use the meal planner, you won’t be able to print or save your plans without one. It’s simple to request an account here. 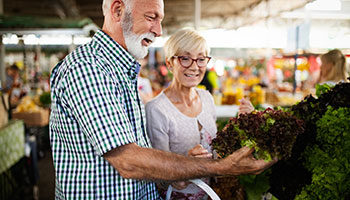 Each quarter we’ll send you The Kidney Kitchen e-News, highlighting diet and nutrition information and seasonal recipes to help you stick with your renal diet. We use MailChimp to deliver our e-News 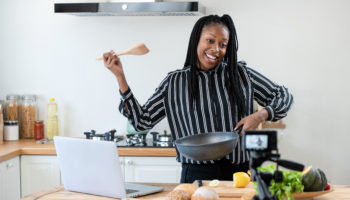